The idea of setting up a community health care centre in Penang was first mooted by a few Chinese community leaders in 1876 and a fund-raising campaign was subsequently launched. A traditional-style building was completed in 1883 on a plot of land about 10,600 sq. ft. at Muntri Street. This was known as the Lam Wah Ee Hospital. 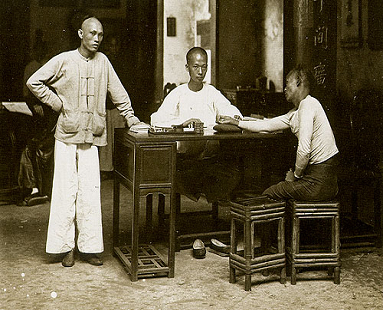 "Lam Wah" means “Chinese in the South” and “Ee” means “medicine”. Twelve community leaders were elected to be the first Board of Directors. Free consultation and medication in traditional Chinese medicine was offered to the public. Within a few years, this became very popular as a source of medical services not only to the Chinese community but also to the other communities in Penang. As a result of this, Muntri Street has since become known as “Lam Wah Ee Hospital Street”. As the demand for these services became more popular, two branch clinics were set up, one at Beach Street and the other at Magazine Road.

What Happened After The War 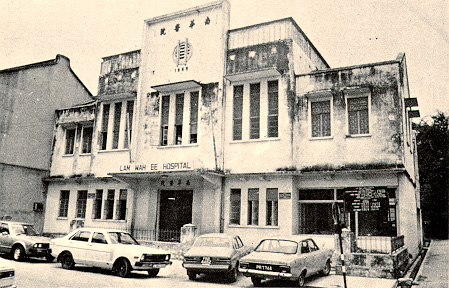 After the War, another campaign was launched to collect donations for rebuilding as the traditional-style building in Muntri Street was destroyed by air raids during the War. In 1955, the present two-storey building was completed. The Beach Street branch was moved to Green Lane in order to benefit the people in the Jelutong and Green Lane areas. The Green Lane branch is situated on a piece of land donated to the Hospital by the British East India Company much earlier. This land is to become the site for the new hospital today. 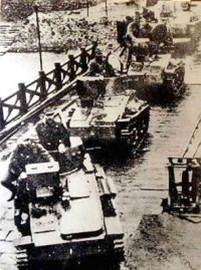 The Lam Wah Ee Hospital at first relied upon the services of experienced traditional physicians or “sinsehs” who came from China. Later a system of examinations conducted by a committee of master “sinsehs” was introduced as a selection device to maintain standards and to encourage younger people to take up the study of traditional medicine. This system is still being practised today. The top three candidates in the bi-yearly examination are automatically appointed as the official physicians of the hospital for a period of two years. These appointments have been considered as a great honour and many of the top Chinese physicians in Penang and elsewhere have originated from the Lam Wah Ee examination system.

The three clinics offer medical services to a total of about 500 cases a day. Over the past hundred years, the number of people who have benefited from this free medical service would probably be in the millions. Throughout this period, expenses were met by income from two main sources: direct donations from the public and rents collected from anumber of properties which were donated by philanthropists or purchased by the Board of Directors and put under the trust of this charitable organisation. 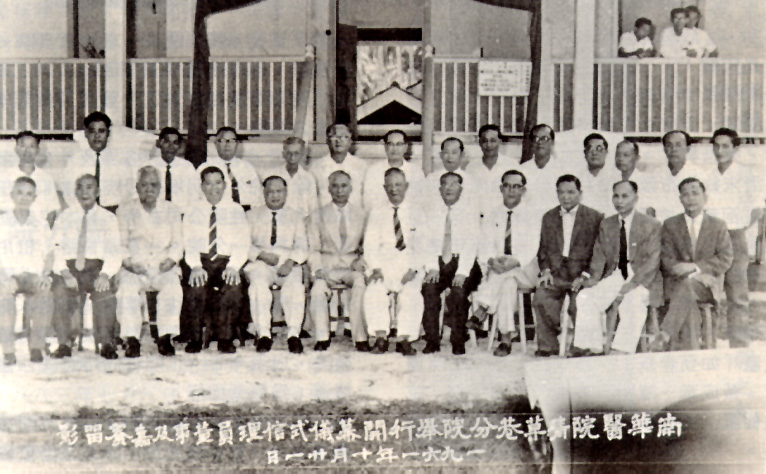 In 1959, The Board of Directors was expanded from 12 to 24 members, to be elected once every two years. This increased the representatives of the Board as well as its efficiency.

As the Hospital is about to move into a new era with the building of a modern hospital, this brief historical account will give all of us a sense of its proud tradition as a charity hospital benefiting the sick and the needy.

The rapid population growth has resulted in a tremendous increase in the demand for medical services and which the Government found it difficult to keep pace. Private clinics or hospitals are expensive and hence beyond the means of the majority. A charity hospital which can provide competent, modern medical services to the poor and needy can supplement the efforts of the Government significantly. Hospital Lam Wah Ee holds a big piece of land in Green Lane

in trust and the idea of building a modern charity hospital has been brewing in the minds of members of its Board of Directors for quite some time. Tan Sri Dato' Loh Boon Siew was elected Chairman in February 1977 to spearhead the realising of such a possibility. He donated RM500,000 towards the building fund to commemorate the demise of his mother in April 1977. Within a few days, his friends and relatives responded with RM750,000 pledged to the Hospital. Tan Sri Dato' Loh donated another RM250,000 and announced that he would match dollar for dollar whatever amount donated to the Hospital Fund by members of the public. Mr. Chong Kum Kwan, an architect who offered his services in an honorary capacity, then drew up the plans for the Hospital. 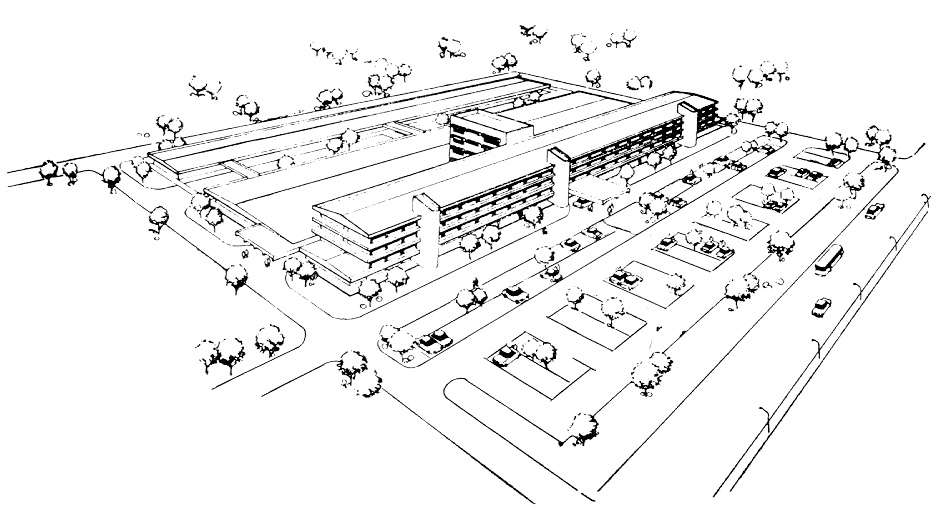 It was estimated that RM10 million was needed. A Building Fund Committee was set up in 1978. Appeal letters were prepared and distributed. The fund raising campaign gathered momentum and swept Penang like a storm as various sectors and communities responded enthusiastically. Donations were collected in various ways and well wishers in Seberang Perai set up branch fund-raising committees. Donations were also received from individuals and organisations from outside Penang, notably from Kedah and Perak. In most of these campaigns, the organiser either bear all the expenses themselves or obtain separate donations to cover the costs so that whatever amount collected goes towards the Hospital Building Fund. The enthusiastic response from all strata of the communities inspired the Board of Directors and the Building Fund Committee to work even harder. Hospital Lam Wah Ee has relied upon public support for its charity work in the past 96 years. It will continue to depend upon the public to maintain this fine tradition — this time on a much larger scale in the form of modern hospital in the service of the nation. 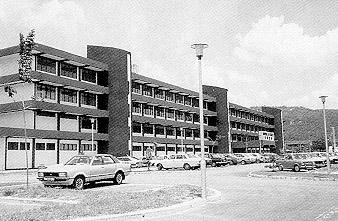 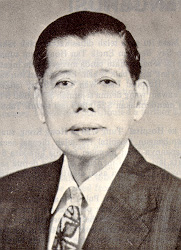 Malaysia, especially Penang, mourned the passing of one of its most illustrious sons on 17th February 1995. TAN SRI DATO' LOH BOON SIEW died in his sleep, a peaceful good death for a really good man at the ripe old age of 80. Born of humble origin without ever having been to school and brought up to believe and fear God by his mother from China, he grew to love, obey and adore her and became a very filial son. He rose by virtue of his honest hard work as a mechanic, literally from rags to riches over the years from the 1930's by having good foresight and convictions to become the richest man in Penang and among the five richest men in Malaysia.

He was respected not for his wealth but for his demeanour and character. His word was his bond. He was a great respector of the Law and Constitution. He was noted for his punctuality at meetings and his comments and decisions on any matter were regarded as words of wisdom. The grandest funeral ever seen for decades in Penang evidenced by the mammoth turnout of the population to pay their last respects and the very large number of tributes and floral wreaths and messages of condolences both local and foreign in the various press media received by the family, all bear testimony to the great love and respect the people of Penang and Asia have for the late Tan Sri Dato' Loh Boon Siew.

Here was a very great and humble man who could walk with Kings, Prime Ministers, Governors and Ministers but not lose the common touch to walk the streets of Penang unharmed, to mingle with the common people, to enjoy his favourite fried koay teow or drink his usual coffee at his favourite coffee shop.

His monumental work in the Founding and Establishment of Hospital Lam Wah Ee brought about by the death of his beloved mother when he pledged ringgit for ringgit to raise funds for the Western Medicine Division of Hospital Lam Wah Ee - a Hospital for people where no one would ever be turned away for treatment for lack of funds or money. The Welfare Department of Lam Wah Ee boasts of a well staffed and developed Almoner System. The Memorial Hall was built to commemorate his beloved mother, the late Madam Saw Kit, whose bronze statue sits proudly in the Hall.

Today, Hospital Lam Wah Ee is reputed to be one of the best hospitals in the country for its charity concept besides being among the best equipped Hospital with modern machines and instruments for the treatment of the wide range of illnesses and staffed by dedicated specialist doctors all fully committed to the concept of charity. The people of Penang, in particular, besides the State Government and the Nation will surely appreciate and salute for years to come the ideals and works of this great man whose philanthropic contributions and service to the country and society will always be remembered.

Board of Directors, Members, Management and Entire Staff of Hospital Lam Wah Ee